Brisbane, 2002. At Resolutions, imagination, vengeance and genius add up to four perfect murders and one patsy. Jay, Sarah and Luke are young and deeply disturbed problem solvers. Dawkins, an inexperienced police detective, uses them to help push his ambitions and they use him to enforce their revenge. The story unfolds through hidden-camera footage and flashbacks to a shattering conclusion.

The story of RESOLUTIONS will appeal to the broad thriller audience and its cast, style and issues will particularly appeal to the 20-30 age range. The story deals with serious personal interaction, leadership and team issues with a strong underlying theme of revenge at-no-cost. 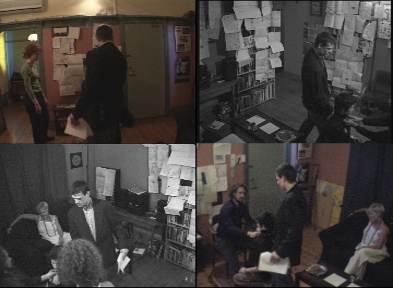 The coldness, intense logic and determination of the main characters avoids the horror aspects of revenge crimes and concentrates on a modern, cynical, self-interest that catches the mood of today’s world. It has an air of “personal terrorism”. The tone represents our new world of no-conscience (and often no-punishment) as modern, young adults experience it through ever-present, fully-detailed media commentary.

The characters are all in the 20-30 age range and are dealt with as credible and attractive people involved in intense situations. However, the movie is also very funny in places through the use of personable and “innocent” secondary characters, involved in parallel sub-plots. The story also has an appeal in the way its mysteries are solved and in the twists on the main revenge theme – the final twist coming in the last few minutes.

“I began with several parameters which shaped the story and the direction of the movie: I was writing for a specific group of young actors I had previously worked with so it had to be a “young adult” story; we had practically no money, so the story had to suit DV Tape technology and limitations; this also limited locations; a shooting and presentation style had to be found to suit the story idea and the technology.”

“I knew I could get inventive and imaginative technical advice from Michael Webb that would allow the story and filmic styles to complement each other. Michael and I have worked together on many projects over many years.”

“The story offers dramatically satisfying JOURNEYS for each of the 7 characters. While the lead character, Jay, undergoes perhaps the most complex emotional journey, it was important in a “closed room” style of movie for audience entertainment and focus that a number of interesting personalities were allowed to interact and impact on each other. This conflict of purposes and wishes brings about much of the suspense and surprise in the story. While the movie shows three murders (including a hanging) and a bashing, it is not violent by modern standards. There are no guns and no blood. The underlying tone of moral rationalisation, coldness and hypocrisy is the most shocking element of the movie.”

“The visual style of the story-telling is of edited surveillance cameras. Almost all the incidents have been recorded from different vantage points by hidden cameras – set by the Resolutions Team – Jay, Sarah and Luke. In three scenes incidents are recorded by one of the characters using a Handycam – and in these instances the recorded sound and the action are used to suit the intimacy of the situations. The flashback scenes of the savage beating of the Team are shot in typical film mode, with close-ups and moving cameras, to distinguish this “reality/memory” scene from the spy-camera scenes where the character movement within the space becomes the focus of dramatic drive. So, within the rooms of the Resolutions apartment, a sense of traffic from place to place is established – and reinforced by shots of real, almost oppressive traffic around the building. The traffic noise almost becomes the background “music” for the film.”

“Such a variety of shot styles and the pressure of long takes required a very strong performance style which at times needed an almost “on stage” presence. The actors were chosen for both their screen presence and their ability to sustain character and action through takes of seven to twelve minutes on many occasions. This shooting and performance style was created not only to impact on the intensity of the movie product but also to create a viable economic model for shooting the movie. With ample rehearsal and limited set-ups – each room location was fully shot with 3-4 fixed cameras before they had to be moved – principal photography took two weeks.”

“The post-production stage has taken almost 8 years due almost entirely to the fact that we had no money for it. The complexities of dealing with so much film footage also slowed the process. Over time, Michael also developed a unique editing matrix style for the movie. A voice-over narrator was also introduced to match the editing “style”. Colour, sound and resolution quality were adjusted to the surveillance style without loss of clarity for the audience but with the intent to make an audience feel it is watching “real” and “secret” events.”

Dedicated to the Memory of Jeremy Hynes R.I.P.