Produced widely in Australia in the 1980s and it has been produced in Washington DC (1984), Ljubljana (1985), and London (2009). Nijinsky at Twilight – produced in 1998 by Theatre UpNorth with Australian ballet legend, Garth Welch, playing the older Nijinsky role. Many other plays have been produced by youth, community and independent companies. 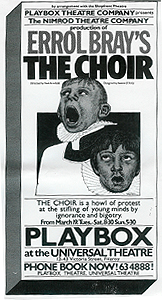