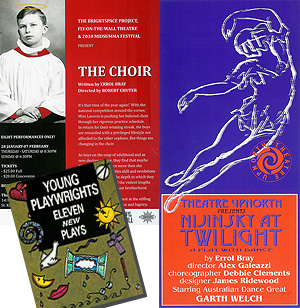 Errol Bray has worked in theatre for 40 years as playwright; director; arts administrator; festival director; youth arts worker; lecturer/tutor. Major achievements include being founding Artistic Director of Shopfront Theatre for Young People, Sydney (1976-1985); of World Interplay festival for young playwrights (1983-1995); of the Emerge Project, Brisbane (2005-2012) for development of new playwrights.
His play The Choir was staged at the Powerhouse, Visy Theatre, in Brisbane in December 2012. The Choir was produced widely in Australia in the 1980s and has been produced internationally, most recently (2009) in London. His book on group-creation of theatre with young people Playbuilding (Currency Press, 1994) is used nationally as a text for drama teachers. In 2001, he was awarded a PhD for his thesis on international projects in new play development. In recent years he worked at Queensland University of Technology, Brisbane supervising MA and PhD candidates in playwriting programs.

In November 2011, his debut novel, Berzoo, was published. It is a coming-of-middle-age/thriller novel set in Berlin and Sydney in 1995.

In December 2016, Errol Bray’s second novel, The Quarters, was published by Clouds of Magellan Press, Melbourne. Civil war in Sydney! Is The Quarters the cause or the cure?

Errol is at work on a new musical.